Cheyenne has fixed up its old railroad station and turned it into a museum about the Pacific Railroad.  The story here is the best of the best.  People in 1860 – 1863 knew the Union Pacific was coming through.  About 300 trappers, business people and other odd ducks started building the town so that when the railroad arrived they were already happening.  Great stories of governors and Buffalo Bill and brothels and wonderful buildings with character in a down town that has been rescued and looks fascinating.  Capitol Street has the Capitol Building (one of the most beautiful I have seen) at one end and the Railroad Station at the other end.  The old down town churches are spectacular.  Lots of historical buildings to tour such as the governor’s mansion.  Ate at the Plains Hotel and some great photos.

Have enjoyed old friends this week who have been most hospitable even through their house is torn up getting new floors.  Hot every day though some evenings cool down and nite is great for sleeping.  I like walking around down town-being a capitol it has good employment.  Also Wyoming has coal, oil and other minerals so is in better shape than many places.  I think the whole state only has 1/2 million people. 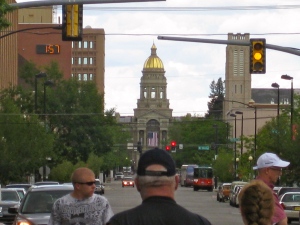 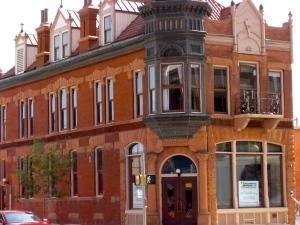 This Methodist Church is older than Pt. Richmond's

A bit much but very real in Wyoming 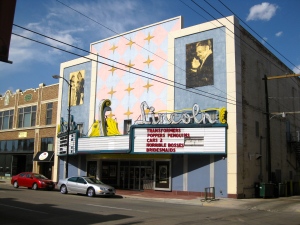 What is the friendship connection?

Comments on: "Cheyenne, Wyoming-Cowboys and Railroads" (2)