Russ is the best sport ever!

I thought I could do some catch up on the blogs today.  However, strange area in Massachusetts.  The wifi is terrible, mine and McDonalds.

The story I was going to tell was the two forts on Lake George with their great history of the French and Indian War and the Revolutionary War.  Doubt you want a history lesson, but both were entertaining and rather inspirational.  We loved how they were set up for children to learn and enjoy.  A great old guy and a couple of young kids reenacting being soldiers in the French and Indian War-British of course.  They literally showed us how to melt and make lead bullets, fire cannons, and marched the young children on the parade field.  Both forts are rebuilt from original plans, though neither fort looked as good as this at any time. 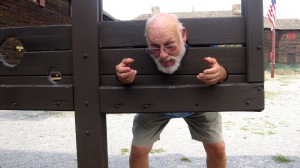 Russ is the best sport ever!

However, if you like “Last of the Mohicans” with Daniel Day Lewis, you would love Ticonderoga.  I met a more serious-enactment actor  at Fort Ticonderoga.  In fact that fort’s benefactors the Pell family, were amazing.  They have rebuilt the fort the way original plans were made and the collection of museum pieces from some of our most famous early Americans was spectacular.  The one man I met was putting the last hand stitches on a military wool coat he has been sewing all summer.  He has many higher degrees in divinity and in psychology.  He just blew my mind with some of his life stories and he sure knew his history.  The others were young men cooking real old soldier meals on fires and they were extremely professional as they told the stories of Nathan Hale, Benedict Arnold and others.

The River Road Campground with a Pool between Corinth and Luzern